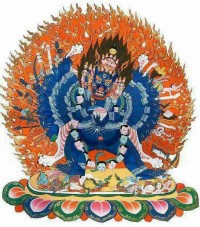 Among the various kinds of Buddhist Tantric initiations, the word that is most often associated with this type of ritual is the Sanskrit term abhisheka (S: abhiṣekaḥ), which is usually rendered into Tibetan as wang (T: dbang). The general meaning of the original Sanskrit term is that the religious ceremony is an act of “consecration.” The Tibetan equivalent wang, often translated as “empowerment,” is meant to indicate that it authorizes the practitioner to receive some form of esoteric Buddhist Tantric teachings and, therefore, to engage in their practice. Another phrase that also alludes to this latter point is that the initiation ritual is part of the process that makes a spiritual seeker a “fit vessel” (S: bhājanabhūtaḥ, T: snod du gyur pa also snod du rung ba) in the sense of being qualified to engage in this type of practice.

The initiation that will be given by Gyumé Khensur Rinpoche at DNKL is related to the highest form of Buddhist Tantric practice, known as Anuttarayoga Tantra, which means literally the “Tantra that is the unsurpassed form of spiritual practice” (T: rnal ’byor bla na med pa’i rgyud). Among the tutelary deities included in this level of practice, this initiation will be a form of the deity whose Sanskrit name is Vajra Bhairava, which in Tibetan is Dorje Jikché (T: rDo rje ’jigs byed). This deity is also known by the Sanskrit name Yamāntaka, which in Tibetan is Shinjé shé (T: gZhin rje gshed). Among the several forms in which this deity’s instructions are practiced, this initiation will be for the form of Vajra Bhairava that is known as the Solitary Hero (S: ekavīraḥ, T: dpa bo gcig pa).

It is customary for a person who wants to attend such an initiation to make a request to the Lama who is conferring it, seeking permission to do so. Among the considerations regarding whether an individual is in fact qualified to attend, it is generally understood that he or she should have undergone sufficient training in the Buddhist Mahāyāna teachings that are described as being “in common with” or “shared with” the Mahāyāna Tantric tradition, in Tibetan thun mong-gi lam (T: thun mong gi lam). This means that the candidate should be familiar with the non-Tantric form of the Mahāyāna tradition, which is sometimes referred to as the Sūtra form of Mahāyāna Buddhism and also as the teachings of the Pāramitayāna tradition, which means the Vehicle of the [Six] Mahāyāna Prefections. After having agreed to give the initiation, Gyumé Khensur Rinpoche recently said that anyone who wishes to attend this two-day event should have received instructions in the teaching known as the “Three Principal Elements of the Path”—that is, those of renunciation, Bodhichitta and right view.

While the opportunity to receive this initiation is extraordinarily rare and it has the potential to be supremely meaningful, it also comes with certain responsibilities and obligations. While Lamas also often require recipients of a particular tutelary deity’s initiation to agree to recite a sādhana ritual of that deity on a daily basis, in this instance Gyumé Khensur Rinpoche has said only that he recommends that attendees recite at least a short version of the Solitary Hero’s sādhana ritual.

Finally, anyone who is interested in attending this special event should first give the possibility of doing so careful thought. The desire to enter this unique form of the Buddhist path should be one that is motivated by the right reasons. The most important reason is that you wish to attain supreme enlightenment so that you can obtain the ability to remove all sentient beings’ suffering. You should not be prompted simply by casual curiosity or the fact that a friend has expressed such an interest. The great Indian Buddhist Master Dīpaṃkārabhadra, wrote the following verses about the reasons for attending an initiation:

Some enter the mandala here
Wanting to obtain the power of spells.
Unlike them, others desire to gain merit.
Still others seek what is beyond the world.

The wise ones are the ones who enter the mandala
Being fully directed toward what is beyond the world
And having generated intense faith toward that goal.
They do not seek any fruit that is of this life.

Your group code is: CGDNKL
Your guest may also call the hotel directly at: 203-748-8318 and mention your group code.

Daily Schedule (to be confirmed):