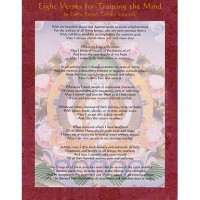 Mind Training in Eight Verses is a short text with a vast meaning. It was composed by Geshe Langri Tangpa Dorje Seng-ge who was born in the Penyul region of Tibet, northeast of Lhasa, in 1054. He is considered to be an emanation of Buddha Amitabha and was tutored by the great Kadam master Potowa Rinchen Sel. It is said that when Geshe Langri Tangpa passed away in 1123, he said, “I have prayed to be reborn in the hells so that I might benefit beings, but it seems I won’t be able to achieve my aim since I keep having visions of divine realms,” and that an array of rainbows, a rain of flowers, and a divine scent filled the sky. His eight verses are renowned and recited by many around the world. They contain essential instructions for seekers of enlightenment and methods to help practitioners transform the challenges of living in the world into the elixir of the two bodhicittas.

Wilson Hurley, serves as MSTC-WDC’s lay teacher, when Gyumed Khensur Rinpoche is not teaching at MSTC. He began his studies of Tibetan Buddhism with Lama Thubetn Yeshe in 1978 and then with Sermey Khensur Rinpoche in 1979 and was instructed to begin teaching by Sermey Khensur Rinpoche in the early 1990’s. He has received Buddhist teachings from many Buddhist scholars, including His Holiness the Dalai Lama. Wilson also serves the community as a therapist and has given meditation instructions, workshops and talks to community and church groups, including the Washington School of Psychiatry and a local public school system.