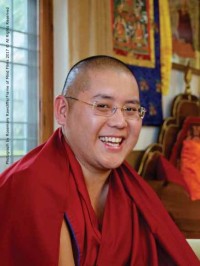 On August 5th, DNKL will have the esteemed honor of hosting H.E. the 7th Yongzin Ling Rinpoche for a blessing ceremony from 9 - 10:30 AM. Gyumed Khensur Rinpoche has expressed his strong encouragement that everyone able to attend this highly auspicious event please make every effort to do so.

The Ling incarnation is a very important Gelug incarnation line dating from the mid-17th century. The Ling lamas have traditionally served as tutors of the Dalai Lamas. The current Ling Rinpoche was born in India on November 18, 1985. At the age of 18 months, His Holiness the 14th Dalai Lama recognized him as the unmistaken reincarnation of his Senior Tutor, the 6th Yongzin Ling Rinpoche, who passed away in 1983.
In 1990 Rinpoche entered Drepung Loseling Monastic University in Mundgod, India at the age of five and formally began his monastic studies there at the age of ten. After thoroughly learning the five major subjects, Rinpoche was awarded his Geshe degree in November 2016. In April 2017, he enrolled at Gyuto Tantric College in Dharamsala, India for a further year of tantric studies that traditionally follows the completion of a Geshe degree. He completed his studies there in February 2018.

At 9 AM we will line up along the driveway and walkway to await Rinpoche’s arrival in the traditional manner, and then follow him into the temple to receive his blessing and instruction. We plan to request Rinpoche to give a formal teaching at DNKL in the near future, so your presence at this event will be greatly appreciated!